“As you sent me into the world, I have sent them into the world” (Jn 17:18); was the theme chosen for the 15th Ordinary General Chapter of the OFS held in Rome from 4th to 12th November this year. With 124 participants (including observers and other invitees) representing 75 nations,  the chapter was a special moment of grace for the international Fraternity to share, reflect together, celebrate and, above all, discern the will of God for the future of the Order.

“The target to aim at is a deep attachment to Christ!” were keys words of Cardinal Pietro Parolin, Vatican Secretary of State,  as he presided over the opening Mass. In his homily, he also said: “it is necessary to have it deep in our conscience that we cannot be ‘begetters’ in the  faith if we have not first been ‘begotten’ in the faith ourselves”.

The General Ministers of the First Order all came  in turns to celebrate the communion of the Franciscan family, each of them presiding over the Eucharist in one of the days with a particular message for the Participants.
Talking on leadership, Br. Michael Perry, OFM said  “Leadership in the spiritual community of Jesus – and in the fraternities founded by st. Francis – is a synergy, serving the others sharing responsibility and convincing them that ‘we are all in it together’”. Br. Marco Tasca, OFMConv., emphasized on the creativity that is typical of the Franciscan charism. He said he often has the impression that we Franciscans want to do things too well; “ like our Seraphic Father, ought to enrich the Church with our madness”. Br Mauro Jöhri, OFM Capuchins,  on his turn underlined the necessity to be good to all. He said: “Goodness is a typical Franciscan virtue. … The goodness of our Heavenly Father who  “makes his sun to rise on the good and the bad alike and rain to fall on the just and the unjust” (Mt 5:45) should stimulate us to be good to all, just as St. Francis was”.
Work at the chapter started with various reports and discussions on them: The Minister general and CIOFS Presidency, general treasurer and Conference of Spiritual Assistants (CAS). Then follow Michel Versteegh, OFS (Netherlands) who gave a conference on the main theme of the Chapter  in which he shared his faith experience in the family, at work as Cardiac Surgeon and in the OFS Fraternity. He brought to light how his job and his professional preparation /cf. OFS Gen. Const. 20.2) are directly connected to his identity and mission as Secular Franciscan. His ten-point systematic presentation captured the attention of all participants.

One of the key moments was the presentation, analysis and discussion on the Instrumentum Laboris entitled: “How should an Order like OFS be managed in all its levels?” Group work and subsequent discussions in plenary sessions were decisive for the results of the Chapter, together with the work of the Commission of the conclusive document. Capitulars were called at various moments to develop the sense of belonging and to act consequently to support the life and mission of the OFS Fraternities at all levels. Regarding the YouFra, emphasis was laid on the naming of the OFS Fraternal animator and the promotion of the “double belonging” OFS-YouFra.

40 Years of the Rule: The OFS General Minister, Tibor Kauser, announced the indiction of a Jubilee year (24th June 2018 – 24th June 2018) to commemorate 40 years of the OFS Rule approved by Pope Paul VI of Blessed memory on 24th June 1978 by the apostolic letter Seraphicus Patriarcha. It is expected to be a year of grace for the entire OFS the world over. He gave enlarged authenticated copies of the Rule to all the Capitulars. In the middle of the week, the participants made a trip to Subiaco at the Monasteries of St. Benedict and St. Scholastica on the footprints of st. Francis,  where he once spent some time. Two round-tables were also held either to consider concrete examples of  living the OFS Rule in the world or themes related to the management of the Order. The biographies of two Blesseds who belonged to the OFS were particularly edifying to the capitulars: Lucien Botovasoa (Madagascar) and Frans Jägerstätter (Austria) as well and the explanation of the process of postulation of Saints. Fraternal evenings were also an important part of the chapter experience, when cultural diversity was celebrated with merry and gifts from different cultural  sources were exchanged. In the last session, the capitulars approved resolutions coming from the work of the past days as well as the budget for the next three years. 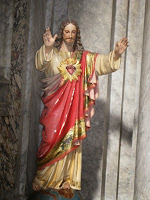